skip to main | skip to sidebar

Davey Weathercock and Olive the rowing hen report from Dog's Plot
Posted by Dogs Plot at 7:33 AM No comments:

Everybody needs a floating Island
Posted by Dogs Plot at 6:08 PM No comments:

Gerald and his mother have this weird relationship

Although Dog's Plot Restaurant is self-serving and not open the the
public, we sometimes invite a guest chef to give us a lesson: here the
very young chef Silas Clay, working with foraged ingredients in our
elaborate summer kitchen.
Posted by Dogs Plot at 2:44 PM No comments:

Although Dog's Plot Restaurant is self-serving and not open to the public, we sometimes invite a guest chef: this one being a very young survivalist who gave a cooking demonstration in our summer kitchen, using foraged materials.
Posted by Dogs Plot at 2:38 PM No comments: 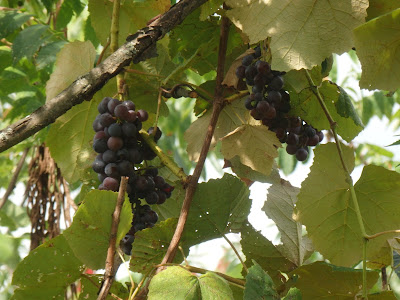 The early European arrivals called this continent  "Vineland", because of the  grape vines that grew wild  over  just about everything and still do. The big old corn crib next door had its poles climbed right up onto theroof and had spread over the whole roof.  It was full of bats and swallows until the neighbor who had hoped to improve the barn sometime, cut the vines and they haven't remounted, but the grape vnes rule around here,.  They are all over the pop up Rose of Sharon trees that came here with me, and go up my Pear trees like they meant to eat the pears.  They would eat the whole tree, if I didn't cut them back...and then they creep along and under the ground. I have made jelly from the wild grapes but they are mostly seed and low on sugar.
So, of course, I decided early on that i had to plant grape vines, so I did: several vines, of several types, in several scattered locations, including beside the chicken house, hoping it would go right up, cover the roof, and mount the cupola.
Which it did, but every season when we have had grapes ripening there and in the other places I had planted them, the birds coons and possums ate them before the fruit was ripe. I think the critters like them better than the wild ones.  I know that the remedy is fences , severe pruning, and nets over the developing fruit, along with a speaker system broadcasting the loud distress calls of the bird species currently feasting.
But I would rather have ... A WORM FARM!
Anyway Dog's Plot is and will stay a low volume homestead.